To Not Be Alone and Not Forgotten

My name is Randy Greenwald and I believe this: we read to know we’re not alone.

This being the internet, with a little bit of luck that quote will emerge somewhere attributed to me and I’ll be thought profoundly wise. But it would be a ruse.

I ran across this idea, that we read to know we’re not alone, while at the same time reading Mary Karr’s The Art of Memoir and I linked her with the quote. But it is not hers.

Online, it is linked everywhere to C. S. Lewis. That kind of sounds right, but, no. It is only ‘his’ because Anthony Hopkins speaks that line while playing Lewis in the movie version of the stage play Shadowlands.  So in reality the credit belongs to the playwright/screenwriter/novelist William Nicholson, the author of the play.

Whether the quote was original with him, I’ll not bother to research further. The idea itself is and has always been true. Those times when I have been most engaged in a story, particularly a memoir, are those times when I realize that the experience of the one about whom I reading resonates with my own. At that point I bond with the author and I realize that I am not alone. 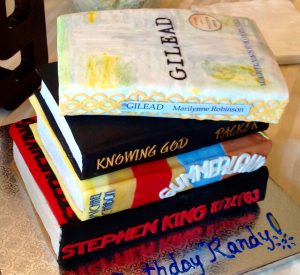 This is the world’s greatest birthday cake.

Lauren Winner in Still speaks of her obsessive anxiety and how that plays out in her life. I see myself in that. I am not alone. Thomas Oden details a significant change in his theological thinking in his memoir A Change of Heart. The details differ in important ways, but the wonder of renewed discovery of old truths crossed my own and encouraged me to know that this is a shared experience. I am not alone.

And I believe that Mary Karr did say somewhere that in her own life as a lonely, friendless, young girl that when she immersed herself in her books, she felt less lonely. The characters in her books became, at least for a time, her friends, her companions along the road, those who would hang out with her and share their hearts with her when no one else would.

So, yes. We read to know we are not alone.

Parallel to this it might be said that we write that we, or others, might not be forgotten. There is a wonderful insult placed into the mouth of Paul Bettany’s Geoffrey Chaucer in the movie A Knight’s Tale. Chaucer’s only way to get revenge on those who have taken everything he owns is to write about them.

I will eviscerate you in fiction. Every pimple, every character flaw. I was naked for a day; you will be naked for eternity.

His motive was negative, but the idea in actuality is positive. What is written, we hope, will not be forgotten. All Over but the Shoutin’   is the wonderfully engaging memoir of Rick Bragg, a Pulitzer prize winning journalist who, along the way, somehow managed to forget to go to college. In the prologue he shares a story about his interview with a mother in the projects whose young son had been killed by a stray bullet on his way to kindergarten. As he leaves after hearing her story she thanks him.He asks her why she would thank him.

“She answered by pulling out a scrapbook of her baby’s death, cut from the local newspaper. ‘People remembers it,’ she said. ‘People forgets if it ain’t wrote down.’”

There is hope, longing, and wisdom in that.

And maybe, if it is ‘wrote down,’ another who has suffered such anguish will read it and not feel so all alone.