My friend Roy (whose blog should be added to your regular reading list as he will one day publish a book and become famous and you will be able to say your were a fan before being a fan was cool) has not read Alan Paton’s Cry, the Beloved Country, the novel from which the title of this blog is (ever so inaccurately) lifted. Apparently the novel had been assigned to him as a high school student and been therefore mentally blacklisted ever since. I hope to change that for him, and for whomever else I can. It’s simply a great novel that bears multiple readings. It is one of my favorites. 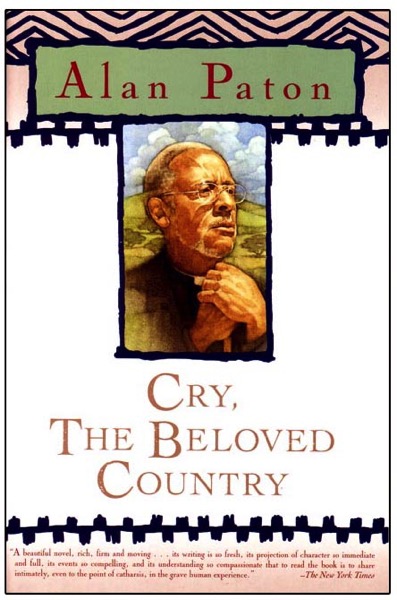 Paton constructs a story of two men whose lives are lived in geographic proximity and cultural isolation. One is a poor black Anglican priest, Stephen Kumalo (“a parson, so(m)ber and rather dull no doubt, and his hair was turning white”) and the other, James Jarvis, is a wealthy white farmer living nearby. Events in the crumbling 1940s culture of South Africa bring these two men together in a dramatic and surprising and tragic way. South Africa was on the cusp of formalizing the racial divisions that were existent in the policy of apartheid and against that backdrop, lives play out, mercy is displayed, and reconciliation is glimpsed. But much here breaks the heart.

The Rev. Kumalo is genuine, a pastor who loves his God and his people. His heart breaks for his country, his land, his parish, his family, and his church. He is honestly drawn as a man who struggles with temptation, loses his temper, and is not above acts of manipulation, but who also repents of his anger and acts with great compassion to those who cross his path. Like the friend he meets in the city of Johannesburg, he is “a weak and sinful man, but God put His hands on me, that is all.” There is a potent reality to these men.

With these men, the heart breaks for the beautiful land that is South Africa.

There is a lovely road that runs from Ixopo into the hills. These hills are grass-covered and rolling, and they are lovely beyond any singing of it.

The land is beautiful but it and the people living on it are broken. For that, there is mourning.

Cry for the broken tribe, for the law and the custom that is gone. Aye, and cry aloud for the man who is dead, for the woman and children bereaved. Cry, the beloved country, these things are not yet at an end. The sun pours down on the earth, on the lovely land that man cannot enjoy. He knows only the fear of his heart.

But the crying and the fear can lead to something greater, even to something beautiful in small acts of grace and in the softening of the hearts of men.

Yes the book breaks the heart, but it heals it as well. It leaves us hopeful, knowing that even though there is death in the land, and that things are not as they are supposed to be, yet small acts of grace can bring significant reconciliation, and sacrificial love can bring life in the midst of death. Maybe we are to realize as well that we are weak and sinful people on whom God has put his hands. One can hope.

As one can hope that my friend and many like him will finish that high school assignment that they might be blessed by this book.

In Debt to Our Trespasses

The Future of “Somber and Dull”