In the late 80s I borrowed from a friend the first volume of a biography of Winston Churchill by William Manchester entitled The Last Lion. When I had devoured that, I rushed off to the library to borrow and read the next volume. But this volume, which I presumed to be the final volume, ended in 1939. A third volume, I heard, was in the works. 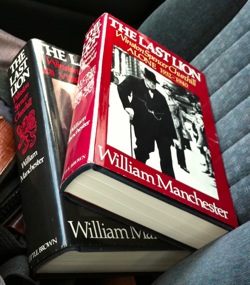 Eventually, I wrote a letter to Mr. Manchester through his publisher Little, Brown, and Company to ask when I could expect the third volume to be published. After a time, I received a personal, hand written reply (rare, even in those pre-email days) from Mr. Manchester’s personal assistant. Mr. Manchester, he regretted to inform me, had had a stroke, and would be unable to complete his work on the third volume. I was saddened by the news both of his disability and of the loss of the capstone to this tremendously written life.

Recently, however, I learned that the third volume had been published

, completed by Mr. Manchester’s personal friend, journalist Paul Reid. Whether it measures up to Manchester’s original hardly matters. It completes that which was left undone, and for that I am glad.

The first two volumes were books I read but never owned. Books that mean something to me I like to own and to see and to hold. But to buy them new now would cost over $60 (from Amazon) and over $30 used.

But today. Today I walked into Brightlight Books, Orlando’s gem of a used bookstore to see if, on a lark, they had the books. Remarkably, they did. Top shelf, dusty, and labeled as having been there over a year, which means in Brightlight’s pricing policy, steep discounts. Both volumes are first edition, first printing, with dust covers and only minor wear. And I bought both for $8.00.

I’m giddy over my new “precious-es”, which I must now re-read. Can’t wait.

All the Least of These