I learned the meaning of ‘chutzpah’ the hard way.

As a young seminary student I witnessed an ordination exam which I and a few others felt was inadequately conducted. Somehow the fact that I was a young seminarian and the exam had been carried out by experienced ministers was lost on me. I went to one of my professors who had been involved in the exam and pointed out the deficiencies we had observed. 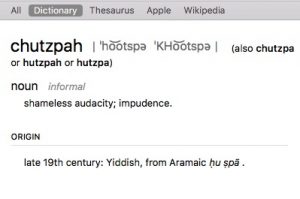 His response was predictable. “It takes a whole lot of chutzpah for you to walk in here and say that.”

I had never heard the word, but the tone with which that sentence was delivered communicated its meaning perfectly. “Who do you think you are to criticize those who have been doing this for the number of years we’ve been at it?”

Indeed. Who did I think I was?

I’m grateful for that professor. He was angry, rightfully, at my cheek. The impudence involved in stepping out of my role and placing myself in a position to assess my elders and find them wanting was massive.

Perhaps I am engaging in another display of chutzpah in raising a tiny voice of protest against the various scholars and genuinely godly men and women who have attached their names to the “Nashville Statement,” recently issued by the Council on Biblical Manhood and Womanhood. Perhaps they need to stand up as one and stare me down saying, “Who do you think you are?”

But perhaps the shoe this time is on the other foot. I find myself asking, “Who do they think they are?” The CBMW is an agenda-driven independently formed parachurch organization. It is not the church and yet it presumes to raise its voice to scold and instruct the church. The very fact that it demands to be heard with authority and to speak to and for the church suggests that there has been a massive realignment in Evangelical Christianity’s definition of and respect for the church. That which was born to assist the church, the parachurch, has grown in its youthful impatience to swallow its parent and to act with independence and swagger.

The preamble of the Nashville Statement should be re-written in terms that require us to ask questions even more fundamental than those of marriage and sexuality:

“Evangelical Christians at the dawn of the twenty-first century find themselves living in a period of historic transition. As Western culture has become increasingly post-Christian, it has embarked upon a massive revision of what it means to be THE CHURCH.”

For that is the hidden revolution in statements like this. Whether the content is helpful or not is beside the point. The very existence of the document and the impetus of those behind it reveal that its authors have not only lost patience with the church, they have seen her as no longer bearing any power or weight.

Speaking as I am attempting to do into the independent, consumer mind-set of Evangelical Christianity, I know that many who read this will be mystified by my concern. So far has our respect for the church and her messiness and process fallen. But having not arisen from the church, a statement like this bears no ecclesiastical authority. There is no labor of any church court or body behind it. It lacks the carefully weighed, though painfully slow, nuanced pastoral concern of ecclesiastical process. It was not generated at the request of the church, and it has not been adopted as the stated judgment of the church. Hence it has no authority beyond the respect given to the names attached to it. And though I have respect for many of these, it is an Evangelical Celebrity Document and nothing more.

Note: An earlier post taking issue with the statement’s doomsday tone can be read here.