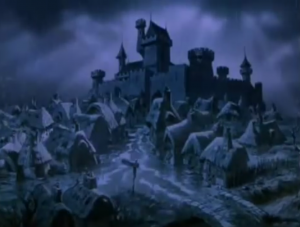 At the heart of Disney’s 1973 Robin Hood is a song penned and sung by Roger Miller (and covered here by Mumford and Sons) which captures the heart’s anguish when life has penned us in with sorrow.

Nottingham was home to the poor people for whom Robin Hood robbed the rich. But even with his heroics, life grew grim. It was unfair.

To escape the despair one might flee, but when the oppression is so deep, the sorrow so profound, even that seems impossible.

Unable or unwilling to escape, an appeal is made for relief, but it meets only silence.

We’d up and fly if we had wings for flyin’
Can’t you see the tears we’re cryin’?
Can’t there be some happiness for me?
Not in Nottingham

The sequence over which the song plays is an image of rain falling on a people for whom all hope is lost. It’s an honest prayer of lament asking in despair, “Can’t there be some happiness for me?”

For the many who pray such a prayer, the response, it seems, is never more than the sound of rain on the pavement.

In some ways, it’s a biblical prayer. The psalmist prays in this way:

O LORD, why do you cast my soul away?
Why do you hide your face from me?
Afflicted and close to death from my youth up,
I suffer your terrors; I am helpless.
Your wrath has swept over me;
your dreadful assaults destroy me. (Psalm 88:14-16)

There is, the biblical writers knew, a time for weeping and mourning (Ecclesiastes 3:4). And yet they did not shrink back from penning such honest laments because they knew, unlike the poor stricken residents of Nottingham, that there would, as well, be a time of laughing and dancing (also Ecclesiastes 3:4).

“Can’t there be some happiness for me?” Yes, they knew there would be. There is resurrection on the other side of death. And for that we long.

Why are you cast down, O my soul,
and why are you in turmoil within me?
Hope in God; for I shall again praise him,
my salvation. (Psalm 42:5)