I’ll Read This One, by Dickens!

I was puzzling yesterday over what book to read next. I had just finished reading a collection of essays on living and dying called The Undertaking, and had read two more stories in The Complete Stories of Flannery O’Connor and wanted something a little less heavy. Rushing out the door to an appointment that might leave me waiting I wanted to take a book with me but which one? The decision could not be nursed; immediacy was required.

Several months ago, sitting with two 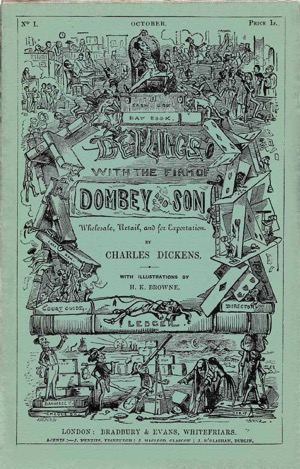 friends, both retired professors of literature and therefore assumed to have some insight into these things, the conversation turned to Dickens. This sounds like a stuffy conversation, I suppose, but it wasn’t. My wife had said how much she disliked Bleak House, that she only got a ways into it before she had to stop. She was relieved to find out that both of our friends found that book to be, well, ‘bleak’ as well. So we asked them for their favorite Dickens, and they agreed on (if my memory is correct) Dombey and Son. Yeah, I don’t think I’d ever heard of it either. But that’s why people get PhDs in literature, to discover things like this.

So I bought it. When it was delivered, of course, I wondered if they’d had to ship it by freight, on a pallet, with a forklift. Its 948 page heft would make even Stephen King envious. My wife asked me if I was going to dedicate the entire next year to reading it (she has noticed my tendency to fall asleep at night reading). I wondered. In college I started a class on Dickens which I dropped when I realized that we had to read one Dickens book each week. That was not going to happen.

So, there I stood, debating between starting this monster (I’d paid for it after all) or waiting to find the next P. D. James Adam Dalgleish mystery at the local used book store. In the waning moments before I left, I decided to read the first few sentences.

“Dombey sat in the corner of the darkened room in the great arm-chair by the bedside, and Son lay tucked up warm in a little basket bedstead, carefully disposed on a low settee immediately in front of the fire and close to it, as if his constitution were analogous to that of a muffin, and it was essential to toast him brown while he was very new.

I decided then that Dickens and I could be quite good friends. For the next year, if need be.

Prayer: the Price of a Miracle