Akira Kurosawa and His Sons

In one short span of time in the early 1980s I took my wife to see three movies in close succession. One was that year’s Academy Award winner for best movie, Terms of Endearment. One was a re-screening of the Judy Garland version of A Star Is Born. The third was Japanese director Akira Kurosawa’s Kagemusha. In each, a main character dies, two of them by suicide.

I nearly lost my movie choosing privileges after that stretch. It was, however, my first exposure to Kurosawa. Years later, after watching two or three other Kurosawa movies, I watched The Good, the Bad, and the Ugly and began to realize just how influential Kurosawa had been on modern movies. (One movie scholar has called Steven Spielberg a ‘son of Kurosawa’, a title apparently Spielberg is glad to bear.)

These days I have stepped into a gold mine of Kurosawa resources through a friendship with a lover of all things Japanese. My friend has recently supplied me with Seven Samurai, Ikiru, and Throne of Blood.

Seven Samurai I’ve seen before. Many others have as well, though they did not know it. Its American remake was a little thing called The Magnificent Seven. (That film is being remade for release in September of this year.)

Ikiru was a delight beyond measure. Translated it means ‘to live’ and it is a wonderful story of a man, pressed with the possibility of death, finding purpose in living. And yet, its ending is so dolefully Japanese.

I just recently had the opportunity to watch Throne of Blood, Kurosawa’s retelling of the story of Macbeth. Of the movies I’ve seen, this one was the hardest for me to follow, and yet, I could not stop watching it. Striking was the performance of the main character’s wife, the one intended to fulfill the role that Lady Macbeth fills in Shakespeare’s play. She plays the role with a steady, unmoving posture, conveying a striking evil manipulation that is full of power and intrigue and, in the end, madness. 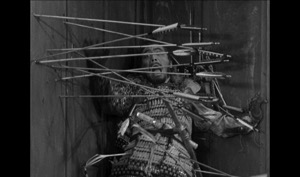 Nevertheless, the part of the film that lingers is the ending. This is especially true when one realizes this film was shot in 1957 without any sophisticated special effects, no CGI, and no green screen shenanigans. Perhaps there is a notice in the Japanese credits that says, “No humans were harmed or killed in the making of this film.” If there isn’t, there should be. One wonders how Toshirô Mifune survived to film another movie. Those were real arrows shot by real archers at a real actor.

I spoke recently with an American film buff who had never heard of Kurosawa or seen his films. If you, like he, have not, do what you can to fix that soon.

[Note: Throne of Blood is available on Amazon to rent for $2.99, as is Ran, Kurosawa’s King Lear interpretation. The latter apparently can be watched for free under a special offer described here.

[Further note: embarrassingly I realized after this post went live that I had misspelled, consistently, at least, Kurosawa’s first name. That has been fixed (I think!), and the glow of my embarrassment has begun to slightly fade.]