I’ll never quite know why and how it is that a particular actor becomes one whose death I lament – but hearing that Philip Seymour Hoffman died of an overdose of heroin yesterday struck me as very sad. I feel I’ve lost something that was valuable. A face, a voice, a presence that I’ll never experience again. 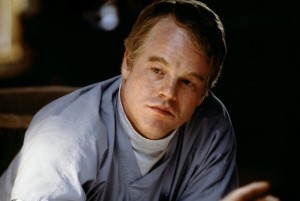 The best and most reflective tribute I’ve read is this from critic and author Jeffrey Overstreet.

In a way, we mourn the death of actors because we love the characters they played, not because we knew who they were as individuals. And it’s plain to see that Hoffman was fighting a terrible battle behind closed doors, while audiences enjoyed what he could do to bring other personalities to life.

We don’t know them, and what the average observer might not know is that Hoffman was fascinated with the character of Christ, and considered himself a believer. This was sparked by the genuine faith of his sister and the vigor of her evangelical community.

The idea that a young person could be sane, generous, intelligent and Christian held out great appeal for him. So did the palpable sense of community he felt with his sister and her friends.

The whole piece is worth reading, and pondering. Soberly, he concludes:

Moreover, I am inspired to remember that even if all of my worldly dreams come true and I gain riches and fame and respect, I am still vulnerable. I have no place to speak any words of judgment over the circumstances of Hoffman’s death. In my moments of clear-thinking, I know that I have my own addictions. I have my own secrets that exist in direct contradiction to what I profess and what I long to be. By grace, I’ve been spared all kinds of devastating consequences. Lord have mercy on me, a sinner, and upon us all.