Nostalgia and the Kingdom

To get me to ignore your message, frame it in crisis terms. I’ve become immune to any appeal suggesting that avoiding this movement or embracing that practice is ushering in the collapse of all the we (generally white Americans) find culturally precious. The claims may be accurate. The sky may be falling. But I’ve grown immune to the screaming.

We see cultural collapse when we are gripped with an unhealthy sense of nostalgia. We are persuaded that the 1950s was the height of safe Christian culture (or, for me for a time, 1860) – conclusions which for obvious reasons will be shared by white men far more than others.

Nostalgia links to our sense of shalom. We long for shalom, and sentiment for a time lost is easier to embrace than hope for a time yet unforeseen. Anything which seems to threaten that nostalgic longing is a portent of imminent social collapse. And for many, the harbinger and possible cause of this collapse is pop culture (rivaled only by, and often seen hand in hand with, the ‘other’ political party). The movies and music and media of our day are eroding our national strength and if not stopped or countered will lead to inevitable loss. So goes the argument meant to make me feel guilty if I don’t buy a ticket to Fireproof.

To argue the case one way or the other seems a bit fruitless to me. Lives are won or lost one at a time through old fashioned love and discipleship. Micro-ministry holds greater hope for the kingdom of God than macro-movements.

That said, pop culture does play a role, but it is not universally negative as some too easily assume. 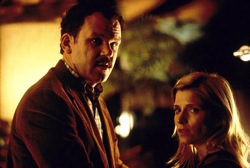 Signs that pop-culture can SERVE the kingdom and not degrade it are not hard to find. The 1999 movie Magnolia could be seen as evidence of our cultural fall with its sex and drug use and gay lead character. But the biblical themes of judgment are rich and the Christian character is the only one who is not coming undone. There is much positive here.

In 2005 Steven Spielberg directed a version of the H. G. Wells classic War of the Worlds. It was not a particularly good movie, but that’s not what matters here. In an interview Spielberg compared this movie with his earlier Close Encounters of the Third Kind. Both involved families. Both involved aliens. The difference, he lamented, was that in his earlier movie, crisis tore families apart. In this newer movie, crisis took families which were apart and pulled them back together.

Progression toward shalom, and not away from it, should be celebrated. Not all ‘progress’ is retrograde.