In the past I’ve completed my NCAA tournament bracket like I really knew what I was doing. That wasn’t much fun because, truth be told, I really DON’T know what I’m doing and pretending that I did was just another source of stress.

So, last night I stayed up WAY past my bedtime (must have been after 10:00) completing four different brackets, all based on different objective metrics. Take issue with me if you like, but then match your brilliance against mine.

The first I completed is based upon offensive ranking. That is, the team with the highest points per game during the regular season would be assumed to beat the team ranked, say 26th. This proved to be a fairly disastrous approach. I’m not sure anyone is seriously looking for Northwestern State to win it all, even with their insane 81 ppg average. In fact, I’m not sure I could find three people who know where Northwestern State IS. This did make me interested in their Friday evening game against Florida, however. So, it was not all a disaster.

Secondly, I completed a bracket based upon defensive ranking. In this case, the team with the lower points per game allowed is assumed to beat the team with the higher ppg allowed. This proved to be a little bit more interesting, as it produced an unlikely but still possible final four of Pitt, Middle Tennessee State, Syracuse, and Florida, with Florida taking it all. This was the only scenario in which my Michigan State Spartans make it out of the first round.

My third attempt was a composite of the first two. I averaged a team’s offensive and defensive ranking, so that a team that was number 30 in the offensive ranking and number 70 in the defensive ranking was assigned a rating of 50. The team with the lower rating, then, would be the presumed winner in any matchup. Curiously, judging matchups this way resulted in a predictable final four composed of all four #1 seeds. I think I’ve stumbled upon the selection committees assignment methodology. Gonzaga, the current #1 team in the country, wins it all. How boring. 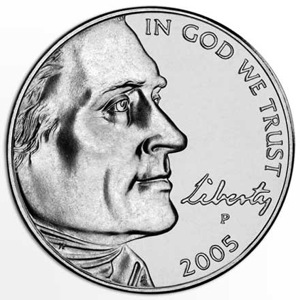 So, for my fourth bracket, and the one I’m most fond of, I reverted to a method I used in 1981, a method which led to a modest financial return. I took a nickel, and for each matchup assigned heads to the team on the top and tails to the team on the bottom, and flipped. In 1981, that method predicted Indiana to win the championship, which they did. Oddly enough, this year, the method produced the same outcome, from a final four including as well Cincinnati, Kansas State, and Villanova.

I’ll assign one point to each accurate prediction in the first round, 2 points for the second round, four for the sweet sixteen, 8 for the elite eight, 16 for the semi-final games, and 32 for the championship game. I’m saying my lucky nickel bracket wins among the four. I’ll keep you posted.