For a while I’ve been urged to read something by Michael Chabon, a Pulitzer prize winning contemporary novelist. When I picked up his 2002 novel Summerland

and scanned the blurb on the back, I knew I had my point of entry. A fantasy novel with baseball at its core – it begged to be read. 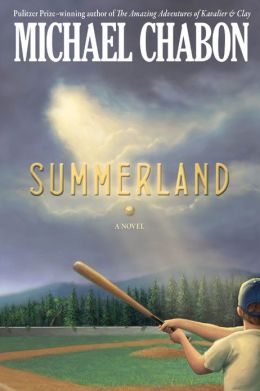 I’m not qualified or able to give a proper review of the book. Reviewers tend to suggest that the book fell short of its potential. As a ‘young adult’ fantasy, it is measured by a certain Hogwartian Wizard. The book was sometimes hard to grasp because so many of the creatures and characters had to be explained. Much new had to be learned before the pieces began to make sense. The pace picked up, however and I found myself well immersed in the last third and intrigued to see the end.

Perhaps this was not Chabon’s, or the genre’s, best. I’m not qualified to tell. But there were gems buried here that made the book a delight for THIS reader.

I know little of Chabon, but he has to be a lover of baseball. He has to be one who understands and appreciates the game.

“A baseball game is nothing but a great slow contraption for getting you to pay attention to the cadence of a summer day.”

He writes with such delight in his subject and in the game:

“The truth was that Sasquatches have never been passionate about baseball.”

And he sees how baseball can be the context for explaining so much else:

“Can you see love? Can you touch it?”
“Well,” Ethan said, hoping it was not a trick question. “No, love is invisible and untouchable, too.”
“And when your pap puts on that big Roosters jersey of his, and sits there watching you in the bleachers with the smile never leaving his face? And slaps palms with you after a game even though you struck out four times looking?”
“Huh?” Ethan said.
“Some things that are invisible and untouchable can nevertheless be seen and felt.”

Most fascinating, though, are the themes in the book which, if not Christian in origin, are able to be read in a Christian way. The villain is a creature named Coyote who, in our world, is known as Satan, who says:

“I would like to put an end to existence as we know it.”

His ultimate aim is to poison the universe at its root, but along the way, he ruins what makes life enjoyable. Any traditional baseball fan will appreciate that Coyote entered one world and began to whisper to the inhabitants that the game was boring:

“Is there anything duller in the game of baseball than watching the pitcher hit? Pitcher goes up there, if she even gets the bat off her shoulder it’s to give it a few weak waves like she’s shooing a little moth away. And then, big surprise, three or four pitches later, she’s out. Well,…why does the pitcher have to hit?…Let somebody else hit for the pitcher. One of the old-timers, somebody whose legs, maybe they’re not what they were….

Now we know the origin of the designated hitter rule. It IS the end of the world as we know it.

Coyote’s goal is to undo the creation. Whether he is able to do so or not, I suppose, should be left unsaid here. But the last section perhaps is reflective of what I have heard elsewhere, that Chabon is a fan of Tolkien and Lewis. Reading it made me wonder if he might also be a fan of N. T. Wright

, or of the Bible itself.

Cracker Jacks and baseball are forever linked. One may not like everything that is in the box of Cracker Jacks, but there is always a prize that makes eating them worthwhile. So, too, is this book full of prizes worth seeking.