In the smoldering remains of Major League Baseball’s April dreams, it’s great for those of us whose primary teams will go home in a few days to have some great stories to hang onto and celebrate. This year’s Big Story belongs to R. A. Dickey, the only knuckleball pitcher left in the major leagues. On a team that to-date has won only 73 games, the NY Mets, twenty of those games have been won by 37 year-old Dickey. He leads the national league in both strikeouts and complete games. He is the first knuckleballer to notch 20 wins since Joe Niekro over 30 years ago. 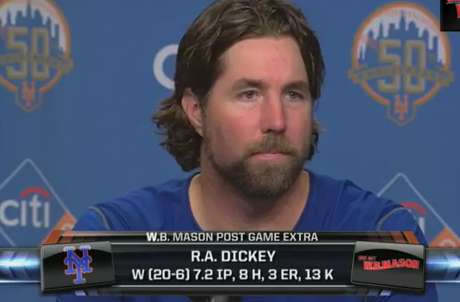 That is the story for baseball fan in me. But by all accounts, Dickey is also a decent human being. A husband, a father, and one who has known enough disappointment and struggle to have gained a sense of perspective on what he has been allowed to do and to accomplish. He does not come across as one so full of his own greatness that the rest of us could not enjoy a cup of coffee or a mug of beer with him. His story, told in his memoir (Wherever I Wind Up

), and recounted in this NPR interview is one filled with abuse and resilience and redemption.

Not incidental to Dickey’s take on life is his Christianity. He does not wear it on his sleeve (or in his eye-black), but he wears it as a genuine part of his person and a significant foundation for his life. He does not trumpet his Christian faith but he does not shrink from it. He does not link his success to his Christianity and thus stir theological questions when he fails. His Christianity is who he is and baseball is what God allows him to do in this stage of life. There is a genuine maturity in his faith as it is allowed to be seen.

But it is not always allowed to be seen. In a World Magazine interview with him, he was asked about that.

The subject [of your Christian faith] didn’t come up in your NPR interview.

Dickey: I brought it up. They edited it out. I always look for opportunities to talk about my faith in a way that is congruent with the story or the question that they ask, because it is important to me that people know. Most of the time it will be edited out.

Most of the time it will be edited out.

The truth is, though, that God never gets edited. Dickey’s story, and his faith, will find its way to those who need to know and need to hear, whether that is from the platform of his thrilling success, or in his backyard someday when he is trying to encourage a son or a daughter to remain faithful to Jesus in the face of either failure or success.

We take note of Dickey now because of his success. Baseball fans LOVE the rise of the underdog. I wish him the greatest further success. But we, like him, must build our hope not upon his or our success, but upon the story of another who proclaims and secures God’s love for us. And that story will never be edited out.

If you want more on Dickey and on the knuckleball, try to see the new movie Knuckleball: the Movie. The trailer sounds like a winner!