Of Books, Stolen and Otherwise

As I’ve mentioned before, my daughter-in-law works at a used book store in Mentor, Ohio. It’s a good thing that that is so far away. The last time there we walked out with something like three-feet of books. If we lived closer, we’d have to buy a bigger house.

One day, she was explaining to me how to interpret the printing history from the bibliographic info inside a book. She told me that she has fantasized about buying, for example, the first printing of the first Harry Potter book before it, and its author, had become famous. 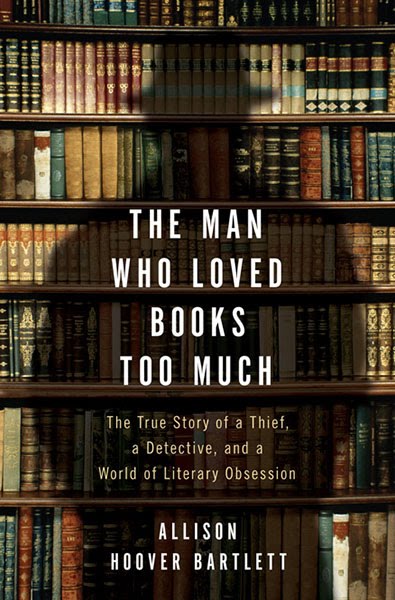 I learned this, of course, in a book.

Journalist Alison Hoover Bartlett has written a fascinating little book called The Man Who Loved Books Too Much.

Tidbits such as this are found throughout the book.

It’s probably safe to say that a guy who walks into a used book store and comes out with 36-inches of books may love books too much. But I buy them with at least the intention of reading them. Bartlett’s book is about people who collect, not read, them.

In particular, it is about one collector, John Gilkey, who, since he can’t particularly afford the books he wants, finds, er, more creative ways to acquire them. The book’s subtitle is “The True Story of a Thief, a Detective, and a World of Literary Obsession”.

Barb and I first heard about this book, and the strange world, people, and events it chronicles, from an NPR interview with the author. If you have a spare seven or eight minutes, I’d encourage you to listen.

Though the book is a story of thievery and detective work, the question that animates it is this: What drives people to collect? Whether it is rare books, stamps, coins, or Beanie Babies, what fuels this desire? Is it a desire for order? Does it fill up emptiness in our lives? Or is it, as Freud suggested, driven by an obsession with conquest?

That idea of conquest links this book with another I’ve been reading.

A refrain that Bartlett would hear often among rare book dealers was this: that all rare books are stolen books. Books of great antiquity all have histories, and for many of them, these histories include military conquest, plunder, pillage, and other kinds of thievery.

that Assyrian king Ashurbanipal, whose kingdom centered in Ninevah was eviscerated by the Old Testament prophet Nahum, was the first person in history known to amass a library, 22,000 volumes at his death.

Was he a literary man? Was he concerned for the preservation of culture? Or was he, like John Gilkey, 2700 years later, simply obsessed with possession? For what Ashurbanipal could acquire with armies and swords, John Gilkey had to use stolen credit card numbers. They were both men who loved books too much.

UPDATE: The NPR story above is not the one we heard first. Here is a longer and more in-depth interview with the author of the book:

UPDATE 2: And here is the actual interview that Barb and I first heard, with one of my favorite interviewers.