A Bonhoeffer Bio Worth Reading

“Reading anything?” I asked a young friend over lunch.

“The bio on Dietrich Bonhoeffer by Eric Metaxas,” he answered.

I cringed. In my judgment, friends don’t let friends read Metaxas. Since I first read it, I believed it to be a badly written book. I didn’t want him to read it.

A biography tells the story of a person’s life. It should do so in a style appropriate to its subject. It should tell the story well. And it should tell it truthfully. It should be critical, but it should withhold sufficient critical judgment to allow the reader to form an opinion of the person whose life is being told. If it is told well, the reader will find something in the biography’s subject that resonates with his own life and experience. I found Metaxas’ book to fail on most of these points. Others with greater expertise fault it for its accuracy. 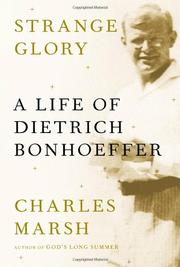 Recently, I was urged by a friend to revisit Bonhoeffer through the eyes of Charles Marsh’s 500 page Strange Glory: A Life of Dietrich Bonhoeffer. Marsh, a professor of religious studies at the University of Virginia, brings a lifetime of interest in and study of Bonhoeffer to his task. He also knows how to tell a good story.

It is rare for an author who has an appreciation for his subject, as Marsh clearly does, to present his subject’s weaknesses and flaws. Marsh does so and even at times downplays Bonhoeffer’s supposed heroism as possibly being over drawn. This in no way detracts from Bonhoeffer, but make him more human. I can better relate to someone who is often as concerned about the style of his shoes as he is about the state of the church. This clearer understanding of his flaws and weaknesses causes me greater respect for the courageous stands he took and for which he eventually, sadly and tragically, died. He comes across as fully human, a real person, not unlike many of us, and yet one forced to make extraordinary choices.

As such, he becomes a mirror for us, one which causes me dis-ease. There is a difficult overlap between Bonhoeffer’s Germany and our own America. It can be pressed too strongly, of course, but Hitler’s drive to make Germany great again challenged the church and her pastors to determine just what the church is and is to be. It is easy to sit back and cheer those who in 1930s Europe made what we now judge to be the right decisions and judge those who made the wrong ones. Those decisions are tough ones on the ground in real life. I’m never quite sure I’d make the right ones. As Christians we speak of our unflagging willingness to give our lives for Christ and his church, but will we? At what point? For what cause? At which time? And where will the courage come from, if at all?

I’m deeply committed to living out my life as a part of Christ’s church, seeking to reflect the Kingdom Jesus brought near. The church can be an outpost of the Kingdom of God in which culture can find rest and restoration. Seeing the church flourish is where I see hope for a broken world. But is that hope well founded? A friend recently wrote to me:

“It’s Christianity and the church that have really disillusioned me. The disconnection from the message of Christ and what has been promoted as “Christian” has broken me. And part of me knows that I have no right to judge other Christians because I’m sure I am just as bad in my own ways, but I do have the right to not join them….”

She has given up hope in the church, a step I’m not at all ready to take. Though this biography reminds me that in a time of grave crisis, the church did fail in many ways, it did not disappear. It was squashed, hounded out of relevance, compromised, and a remnant sent into exile. But it prevailed, and persevered through many in hidden ways living out the norms of the kingdom, and the gates of hell did not prevail. A brave man died, but did not die without such hope.

And so, when my friend mentioned his interest in Bonhoeffer, I put this one in front of him. I gladly do the same for you.

Note: to see Charles Marsh’s own take on Metaxas, read this.

The Church as (inadvertent) Political Institution

The day Something Worth Living For is released to the world.November 6, 2020
46 days to go.