Though I read a lot, the time I get to read books unrelated to my ‘work’ is fairly limited. When I choose a book to read I know that it likely will be my companion for many days.

Knowing this, I hesitated picking up David James Duncan’s 645 page The Brothers K. Could I trust the recommendation of the man who loaned it to me? Would it be worth the six week investment it would take to read it?

I have the answers, now. 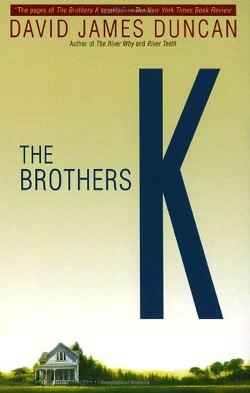 I had never before heard of David James Duncan. My fault, of course, not his. It is true that he writes books that attract literary attention (this was a NY Times Notable Book for 1992). It is also true that he generates them slowly. Nearly ten years separated this from his previous release of The River Why.

The title is a clear allusion to another ‘Brothers’ book (one I’d like to read again, the next free ten weeks or so I find), but in this case the ‘K’ refers not to the brothers’ last name, but to the symbol used for a strikeout in scoring a baseball game.

Like Dostoevsky’s novel, The Brothers K follows the lives of four brothers and their relationship with their father. Added in the mix are twin sisters, baseball, Seventh Day Adventism, fly-fishing, the Vietnam War, broken dreams, and reconciled lives. Duncan captivatingly recounts 20+ years of a family’s life from the fifties to the seventies. Hugh Chance is a pitcher whose potential major league career is cut short by the Korean War. His often rocky marriage to his Adventist wife Laura produces four sons, each begging to be assigned a different four-letter code by Mr. Myers and Mr. Briggs: Irwin is passionate, Everett is the skeptic, Peter is the spiritual one, and Kincaid observes and records it all.

I know little about the author other than he, like many, has little patience with religious fundamentalism and blowhard clergymen. And though the book has smoking, drinking, drug use, Buddhism, fornication, swearing, anti-war rhetoric, and religious skepticism, it is one of the richest affirmations of the importance of committed family relationships that I’ve encountered in some time. Family values rule.

I’m intrigued by what an author can do, and the relationship he can build with his reader. The details Duncan exposes concerning this family are vast. One might at times judge them tedious. But I can picture the house in which they live and the town they inhabit. Quote me a piece of dialog and I could probably tell you which character spoke it. I fully expect that I could travel to Washington state and sit down with the children and grandchildren of this family, though I know they are fictional. I feel like I understand them, I understand what makes them tick, I understand what motivates them, I understand why they care so much about what they care about.

And I realize that to come to this place, I needed to spend hours with each. I understand these fictional characters better than I understand many real people. And it’s quite possible that I have spent something like fifteen-twenty hours letting their story be told without interjecting my own words and thoughts and judgments. I’ve only been able to listen. How many real people – even those in my own family – get such attention from me? Not many. Maybe none.

I’ve been searching for a word that captures a book like this. Like Jonathan Franzen’s The Corrections the novel’s plot lines are not as important as the characters that inhabit them. Unlike Franzen, these characters become ones we (at least I) love though we may fiercely differ with them. The word that comes to mind is ‘rich’.

There are a few books that, after reading them for some time, I have not wanted to come to an end. Matterhorn was one. The Elegance of the Hedgehog was another. The Brothers K, rich, surprising, rewarding, has joined that list.