I was asked the other day about why I believe we should use leavened bread in the celebration of the Lord’s Supper. In response, I passed on something I wrote about that several years ago.

The Passover meal celebrated by Jesus and his disciples would have used a loaf of unleavened bread. Whatever it looked and felt like, my guess is that it was certainly NOT a wafer. And I would be surprised if it would have been mistaken for a Matzoh cracker. The wafer and the cracker have arisen as convenient forms for unleavened bread

But as they have, they have lost completely the picture of anything that would resemble food that sustains the hungry soul. There is no question that the bread used at the last supper was unleavened. There would have been no other bread available in a Jewish household on those occasions. 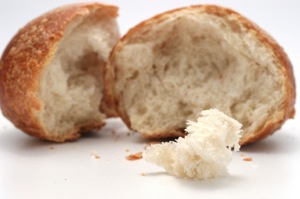 But if the Lord’s supper was to be celebrated more frequently than during the Passover, and in Acts it clearly seemed to be, then it would not be a perpetual diet of unleavened bread. That would not adequately convey our coming to Christ for regular sustenance. Rather, what should be used, and I suspect WAS used, was the regular leavened bread of everyday life.

The unleavened bread of Passover was symbolic of depravation… that in fleeing Egypt, there was not time to leaven the bread. But with the Lord’s supper we have quit fleeing, and we come regularly to eat with the one who sustains us… Jesus.

We should eat a big loaf of good, wholesome, leavened bread, and take a big chunk of it, acknowledging our hunger for and dependence upon him.

This reminded the woman who was asking of a little girl in her former church who would every week tear off about a third of the communion bread and shove it into her mouth saying,

Somehow I think that she was better at ‘discerning the body of Christ’ than many of the rest of us.