Lizards in the Fridge 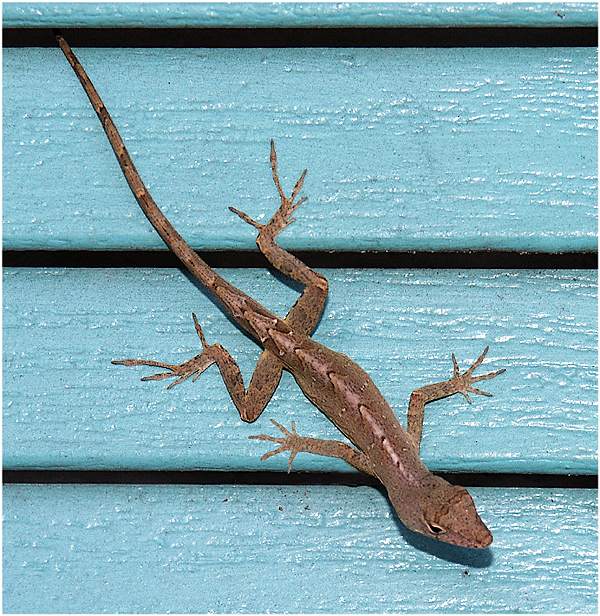 Subtropical Florida, where we are ‘cursed’ to live, is awash in lizards. These small guys are everywhere in the yard, on the trees, in the bushes, one currently confined to my son’s terrarium (“Where are you going, Colin?” “Outside to catch some bugs for my lizard.”), and even in the house.

Once, when I was new to Florida, a lizard in the house scurried into our refrigerator as I held open the door. I thought, “Well, all the worse for him, I suppose” and I left him there somewhere under the crisper figuring in a very short time he could do no harm.

Later, I told Barb, and she was beside herself that I had left the creature there. So, I did the good husband thing. I dismantled the fridge, found the now stiff (and being a northerner assumed dead) lizard, and tossed him in the trash. Job done. Until, of course, his cold blood warmed up, he unstiffened, and escaped from the trash.

That was a long time ago. I’ve learned now throw stiff lizards outside. Or give them to Colin.

What’s that story got to do with anything?

I love the honesty of those who read this blog, like that of this person, who responded privately (which is an option open to you all) to my summary last week of the steps we can take in the process of sanctification.

Within a framework of God’s gracious changing of us are five concrete things we can be about. These are the things God wants us to do. Through these things HE works HIS change in us…. They are:

1. Know who you are
2. Seek the work of God’s grace to change you
3. Put yourself in the way of grace
4. Mortify sin
5. Rejoice in the gospel

To this he responded honestly:

I especially suck at number 4.

I love that honesty. Truth be told, I suck at number 4 as well.

But such honesty, of course, is lacking in those who really do ‘suck at number 4’.

That’s the thing. Honesty and clarity is a gift that God gives us to help us grow. If I cannot see the lizard in the refrigerator, I am not grieved by it. And if I’m not grieved by it, I won’t have the honesty to admit it is there. And if I lack that honesty, I’ll protect it there, and won’t do anything to extract it.

The Pharisee in Luke 18 could not, or would not, see his sin and so he was not bothered by it. The honesty and clarity that God gave the tax collector was painful. He was miserable because, of course, he ‘sucked at number 4’.

Clarity causes misery. But even that misery is evidence of God being at work.

Eventually, under God’s tutelage, we will less and less be comfortable with various lizards and we will extract them. Some we will throw in the trash, and they’ll come back to grieve us again. But some, in time, with God’s help, we’ll throw outside. (Or, turn over to the torturer with his terrarium.)