Stories of Family and Friendship

In contrast to the movies which immerse us into a violent world, an immersion we somehow vicariously, but safely, enjoy, there are other films which seem to celebrate the pleasures of friendship and family, and do so without overly sentimentalizing either. 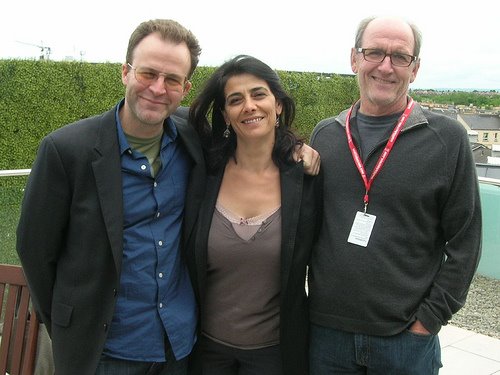 Two men who seem to do this consistently are Tom McCarthy and Peter Hedges. Hedges wrote the screenplay for What’s Eating Gilbert Grape and About a Boy and wrote and directed Pieces of April, and the recent Dan in Real Life. McCarthy has but two movies to his credit (though he has acted in many): The Station Agent and The Visitor. All of these movies are worth watching.

Pieces of April is worthy of note here because it focuses upon a prodigal daughter reaching out to her estranged and highly dysfunctional family through her preparation of a Thanksgiving dinner. Watch it this week. You will be touched, not only by the urge toward family reconciliation, but as well by the beautiful picture of community which is displayed. Dan in Real Life is a rare film that sets the struggles of its main character in the context of a healthy, functioning, strong family, and it is that family that surrounds the character in his point of need.

The Station Agent is an odd little film (oddly, Patricia Clarkson is in both this movie and Pieces of April) about several rather odd characters who find friendship, and through friendship find themselves reconciled with their lives and with others around them.

The Visitor is the most recent of these films, and is a bit heavy in its full frontal (and tilted) consideration of America’s immigration dilemma. It, like the others, takes a man who is by life battered and bored and reintegrates him into real life through friendship.

None of these movies were box office smashes, but all are wonderful stories. And each reminds me why I enjoy watching movies.

But if they at all reveal a cultural longing for relationship and reconciliation, we can perhaps judge that the efforts the church makes to both exist as a real community and to as well facilitate community where we live are well worth the effort, though immediate measurable results are not visible.

I’d love to hear what others think.

[Note 1: Both Pieces of April and The Station Agent have some scenes of drug use. As well, Pieces of April includes some unsettling pictures of, well, suffice it to say that a character is suffering from breast cancer. Further be warned that Pieces of April requires watching within reach of a box of Kleenex. You have been warned.]

[Note 2: Before you conclude that my movie watching habits have been rescued, redeemed, and focused in a more wholesome direction, you should know that next in our queue is Hellboy II. And of course, before you think me lost forever in the other direction, you should watch and ponder Hellboy I, a film in which the main character is thrown a cross necklace which burns the mark of the cross into his hand. The one who throws it to him says as the camera focuses upon the mark of the cross, “Remember who you are. This was given to you by your father.” Based upon the strength of that image and reminder Hellboy regains the capacity to do the right thing. Very interesting.]

It Doesn’t Make Any Sense at All