Here is a corny little movie that I put together a couple years ago as an experiment (and posted here for the first time a year ago).

What it amazingly preserves are the actual voices of two very young and naïve and very much in love people making some incredible promises to one another 32 years ago today. (I post it again because, well, I like it, and there are new readers to this blog.)

We are no longer young, and not quite as naïve, and our love is richer having aged and weathered a few storms.

But the vows. How does someone keep such promises? Barb, in my case, has made it so much easier than it should be with her steady and ever certain love for and commitment to me. And we were told early on to never let divorce ever be an option for consideration. So we were wired for this.

And yet ultimately, we give praise to a gracious God who has given us the courage to deal with differences when they arise, the good sense to apologize when we have messed up, the humility to forgive when forgiveness is sought, and the brokenness to know that we are at all times dependent upon Him.

(Plus, I think she was and is really cute!)

For Dads of Pretty Daughters

Seeing this morning that there is a Facebook group called “Guns don’t kill people. Dads with pretty daughters do”, I was reminded of this poem, found many places on the internet (and clipped from here).

As the dad of three pretty daughters, two of whom are single, I understand ‘dreams infanticiddle’.

Song To Be Sung By The Father Of Infant Female Children

My heart leaps up when I behold
A rainbow in the sky;
Contrariwise, my blood runs cold
When little boys go by.
For little boys as little boys,
No special hate I carry,
But now and then they grow to men,
And when they do, they marry.
No matter how they tarry,
Eventually they marry.
And, swine among the pearls,
They marry little girls.

Oh, somewhere, somewhere, an infant plays,
With parents who feed and clothe him.
Their lips are sticky with pride and praise,
But I have begun to loathe him.
Yes, I loathe with loathing shameless
This child who to me is nameless.
This bachelor child in his carriage
Gives never a thought to marriage,
But a person can hardly say knife
Before he will hunt him a wife.

I never see an infant (male),
A-sleeping in the sun,
Without I turn a trifle pale
And think is he the one?
Oh, first he’ll want to crop his curls,
And then he’ll want a pony,
And then he’ll think of pretty girls,
And ho ly matrimony.
A cat without a mouse
Is he without a spouse.

Oh, somewhere he bubbles bubbles of milk,
And quietly sucks his thumbs.
His cheeks are roses painted on silk,
And his teeth are tucked in his gums.
But alas the teeth will begin to grow,
And the bubbles will cease to bubble;
Given a score of years or so,
The roses will turn to stubble.
He’ll sell a bond, or he’ll write a book,
And his eyes will get that acquisitive look,
And raging and ravenous for the kill,
He’ll boldly ask for the hand of Jill.
This infant whose middle
Is diapered still
Will want to marry My daughter Jill.

Oh sweet be his slumber and moist his middle!
My dreams, I fear, are infanticiddle.
A fig for embryo Lohengrins!
I’ll open all his safety pins,
I’ll pepper his powder, and salt his bottle,
And give him readings from Aristotle.
Sand for his spinach I’ll gladly bring,
And Tabasco sauce for his teething ring.
Then perhaps he’ll struggle though fir e and water
To marry somebody else’s daughter. 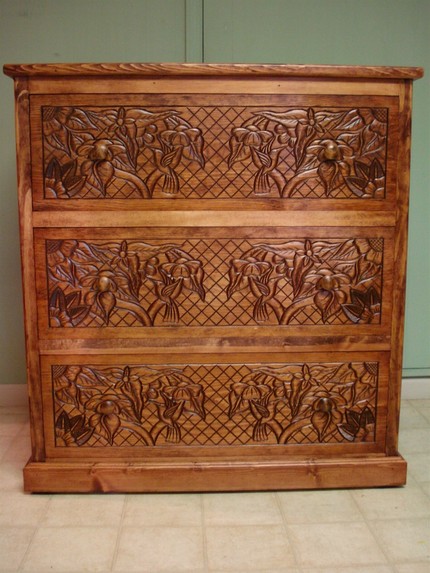 I commend to you a glimpse at this piece of furniture.

This was hand made, and hand carved, from a hand drawn design, by my very, very gifted son-in-law.

(Some of you may say that I’m not awed, but odd. I’ll not dispute that here.) 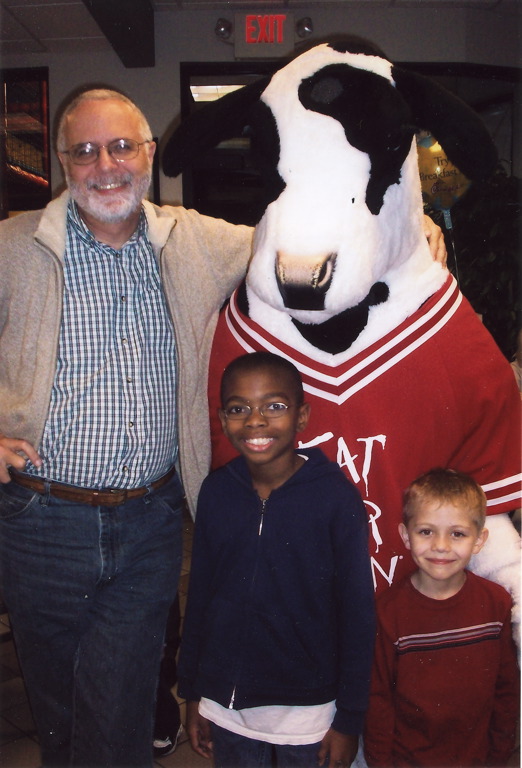 NOTE: Astute observers might compare the picture of the young man at the bottom right of this photo to the photo in my profile at the right and conclude that we are related. What do you think?!

Talk to Your Dad 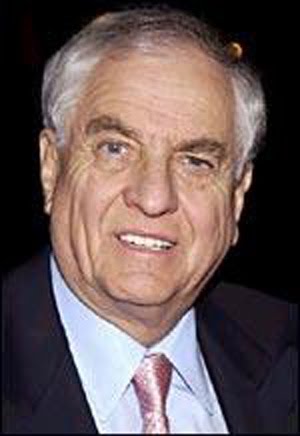 In it he spoke about a movie he did called Nothing in Common starring a young Tom Hanks and Jackie Gleason as a father and son. He said that men will stop him in restrooms and say something like this to him: “I hadn’t talked to my father in years, until I saw that movie. Thank you.”

When I heard him say that, I wanted to talk to my father. I can’t. He’s been dead for nearly fifteen years.

But guys, some of you still can. Call him up. It’s not Father’s Day which makes this a perfect time to talk to him, simply because it’s not expected.

Side note: He also said that no one could curse as beautifully as Julie Andrews. I didn’t see THAT coming!

I think this has a good look about it: 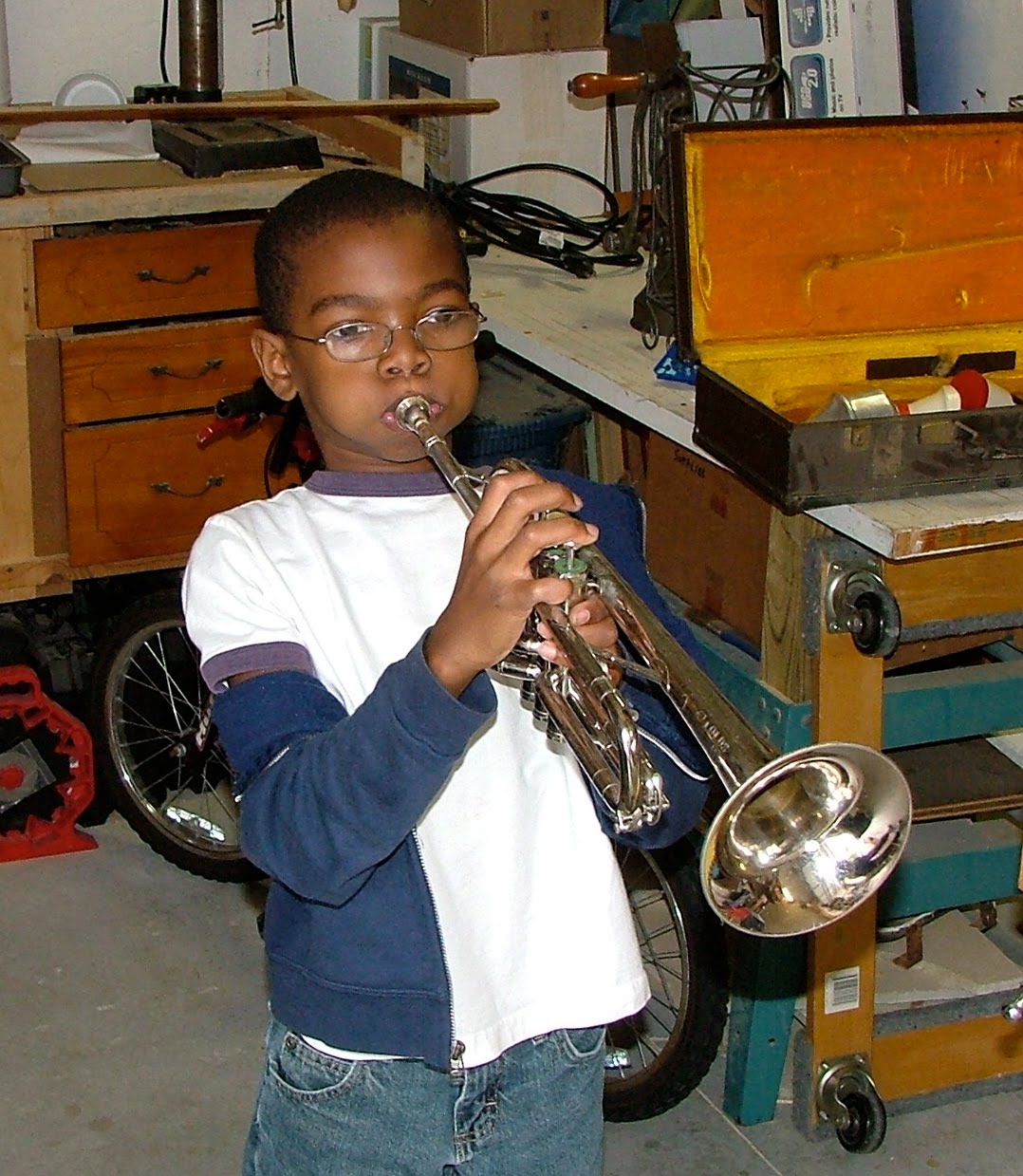 Of course, at this point being only about 2 minutes into his trumpet career, technique could use some work. But still…

Before breakfast Monday morning, I drank three cups of coffee in honor of my daughter. In fact, every cup of coffee I drink is in her honor. That, though, is a story for another day.

The connection between my daughter and coffee centers around the bi-weekly games of chess we play at local coffee shops, a tradition at least five years old.

This Monday afternoon we took our game to a new level of fun-ness.

My daughter, brilliant girl that she is, has a clever strategy. She takes so much time between moves that if I ever have a coherent plan, it is, by the time my next move comes around, long forgotten. So, just before Christmas I decided that ‘we’ needed the discipline of the chess clock.

A chess clock consists of two timers connected by a switch that switches one off when the other is switched on. Thus, when black, for example, is contemplating his move, his timer is counting down. At the end of his move, he pushes a button which stops his timer and starts white’s timer. A player can take all the time he needs for any particular move, but if his time runs out before the end of the game, he loses.

When I last used a chess clock, the Beatles were still a band, Richard Nixon was still an honest president, and Americans were still dying in Vietnam. I had, no surprise, forgotten how the thing was supposed to work.

My daughter gave me an Amazon.com gift certificate for Christmas. I transformed this into a chess clock, and we were therefore armed and ready to go.

For our first game, we set the timer for 25 minutes. That is, each of us would have 25 minutes to make all our moves. Such a game would, you see, last no longer than 50 minutes. Ours probably lasted forty or forty-five. But the thing is, we finished it. With time to spare. We actually finished a game. A miracle.

With some of the consequent ‘time to spare’, we decided to try our hands at a ‘blitz’ game. This is the chess one sees being playing in Washington Park in the highly recommended movie Searching for Bobby Fischer.

In Bobby Fisher players play whole games in under two minutes – it is a sight to see. (See the YouTube clip below.)

We were more modest in our goals. We set the timer for five minutes each.

Oh, was that fun. Hectic, intense, sloppy, but fun.

The ranks of ‘grandmaster-dom’ are not threatened by our play. But I have this hope that many years from now, when my little girl is a mature woman of fifty and I am, presumably, long gone, that she will remember the day she and her dad broke out the chess clock for our bi-weekly game.

The exhortations made here are not uncommon:

“My friend, if you are not able to leave your children a legacy in the form of money or goods, do not worry about that. And do not wear yourself to death either physically or spiritually in order to accumulate a great deal of property for your children; but see to it, night and day, that you pray for them. Then you will leave them a great legacy of answers to prayer, which will follow them all the days of their life. Then you may calmly and with a good conscience depart from them, even though you may not leave them a great deal of material wealth.”

What makes this quote uncommon is the context in which the author sets it, a context I find adds the encouragement to persevere that the mere exhortation lacks:

“Our family has been a believing and praying family for three generations. The elders have prayed faithfully for their descendants. During my whole life I have walked in the prayers of my parents and forbears and in the answers to these prayers. A quiet rain [of answers to prayer] drips steadily down upon me. I reap, in truth, what others have sown.”

A Sucker for Little Square Puns

When I was in high school, my friend Dave and I wiled away the hours by making puns and putting them in fictitious dictionaries.

I’m afraid that in some ways, apples and trees stay pretty close together. My post yesterday about Krystal coming to town spawned this dialog between me (R) and my sons Seth (S) and Matthew (M).

My apologies to all who know them, especially their long-suffering wives. And deepest sympathy to the poor woman who has lived with me for thirty plus years.

S: While the image was loading I wondered why. Then it became Krystal clear.

R: I was pretty steamed that it wasn’t a White Castle.

S: You sure are in a pickle, aren’t you?

R: Yes… but I’ve mustard up the resolve to confront the reality.

S: Good thing it was only a tiny little problem.

R: It’s all squared away now.

M: Holy cow, you guys have really ground this one to death.

M: I’m trying to ketchup with you guys but my brain is already fried. I’m going to have to chew on that for a while.

S: Sounds like we’ve got a whole bag full of problems!

There are only three people in the world who find any of this funny. 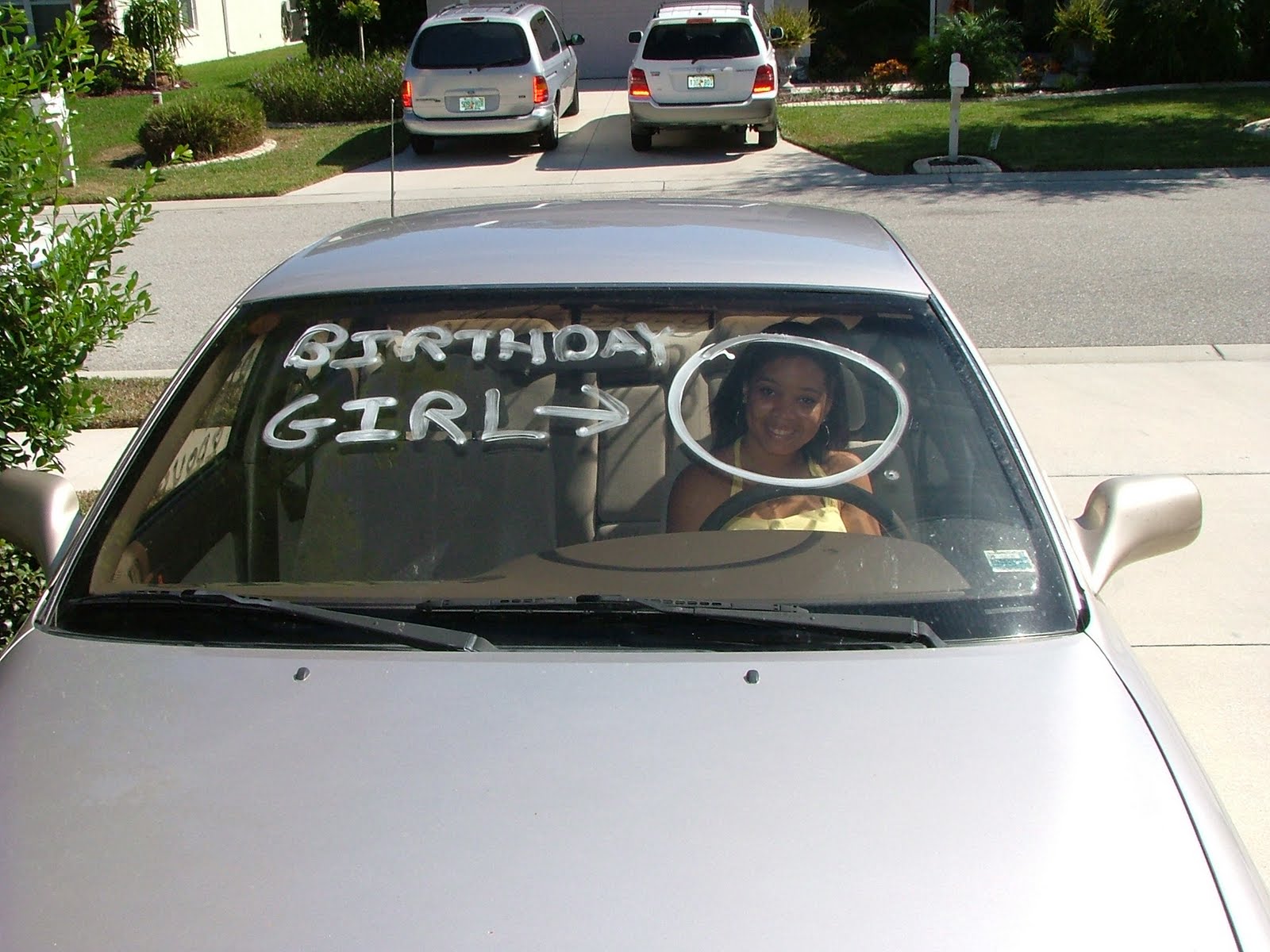 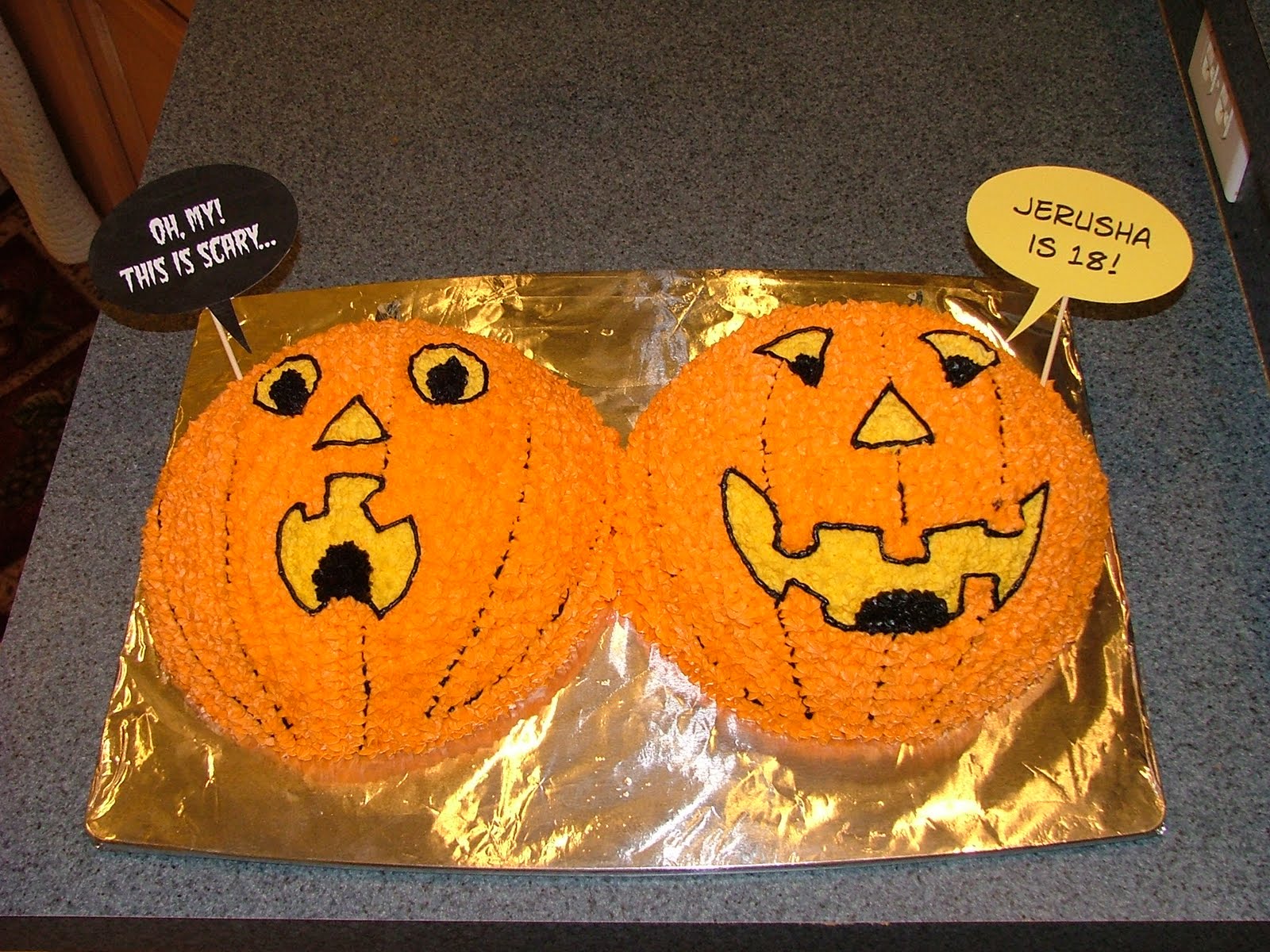 To see the detail in either picture, click on it.