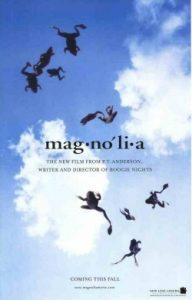 Issues that matter seem to be landing as profusely and as suddenly as the frogs in Paul Thomas Anderson’s remarkable film Magnolia.  As a Christian pastor, I want to speak intelligently and helpfully to the issues, for they do matter. But I do not want my responses to be based on uncertain information or misinformation. I want my responses to be reflective and careful. And I plead that I don’t often have time to pull that all together before another frog has dropped and the world is off in another direction.

One of my pastoral heroes, the late John Stott, alluded to two errors pastors confront when addressing controversy.

Our task as preachers, then, is neither to avoid all areas of controversy, nor to supply slick answers to complex questions in order to save people the bother of thinking.

Complexity demands nuance, and nuance time, and under the protest of time I am silent. It may be rather that I am gutless. I need to take his words to heart.

Instead, it is our responsibility to teach them with clarity and conviction the plain truths of Scripture, in order to help them develop a Christian mind, and to encourage them to think with it about the great problems of the day, and so to grow into maturity in Christ. (Between Two Worlds, page 173)

The recent debate regarding immigration and refugee resettlement was stirred by the president’s executive order barring (temporarily?) immigration from certain countries (an act widely seen as one designed to close our borders to Muslim immigrants). When such issues surface, pastors are often told by good people what to preach. I resist such direction. Whether I do so out of wisdom or laziness I’ll let others determine. This time novelist Stephen King offered to choose my text for me. 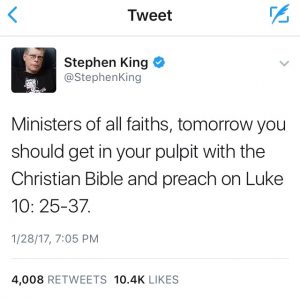 I didn’t comply and so probably need to give up trying to get his autograph. (However, if Mr. King or anyone else is still interested he can listen to my sermon on that text from June of 2015. It may be still relevant to this situation.)

Others have been directing our attention to the book of Leviticus and its language of care for the stranger. As gratifying as that might be, I’m guessing that some of those doing so are not quite so fond of what it seems to say about homosexual sex or the viability of human life in the womb.

There are those telling me what to preach and those who want to make sure that what I preach does not impact the church’s tax exempt status. The president this week announced his intention to free churches and pastors to endorse political candidates.

On the one hand, I’m all for this. The government should have no more say over what I say from the pulpit than Stephen King, and if churches curb their message to gain tax relief, they have already voluntarily compromised that freedom.

I don’t endorse candidates from the pulpit, but the government’s preferences on that matter have nothing to do with that decision. It is utterly foolish to hitch the church’s wagon to a political horse. When the horse goes down, it takes the wagon with it. (It’s intriguing in this regard to watch Trump supporter, Eric Metaxas, twist and turn as he uncritically defends Donald Trump’s first two weeks in office.  But he must. It’s what one must do, individually, or as a church, when we have declared someone besides Jesus to be ‘our’ man.)

“Evangelical” Christianity used to be honorable. But what it once was has now been dishonored by wittingly or unwittingly allowing itself to be defined politically. In the process its vital message of the kingship of Christ and the supremacy of his gospel has been obscured if not lost. There is more wisdom in Stephen King counseling me to preach on a biblical definition of neighbors than there is in a church celebrating the ‘right’ to endorse a candidate. One can only bring good, the other only disaster.

So when some want to hear a sermon on the “Good Samaritan” or when others find biblical support for compassion in the remote outposts of Leviticus, they reveal good instincts. That instinct says that the biblical authors who form the framework of Christian faith and practice are those to whom we are to listen first in framing a response the the issues of the day. We are, as Stott reminds us, to “develop a Christian mind” and then “to think with it.” This we should do, but only after having first removed our nationalistic “America first” lens.

As Christians, Christ and his kingdom must always be first.