Tim Keller, the now well-known pastor of NYC’s Redeemer Presbyterian Church has had a significant impact in my circles and on me personally. He’s one of the finest preachers I’ve ever heard, uniquely gifted to speak with wisdom and clarity to a confused and skeptical age. His teaching has straightened a great deal of my own confusion. I have been thankful for just about everything Tim Keller does and has done until now. His book Prayer: Experiencing Awe and Intimacy with God seems to be one in which he loses sight of both his audience and of the type of book he wanted to write. 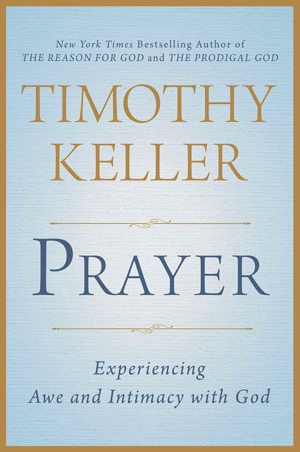 Instead of writing a book on prayer, he has written a manual on how to use prayer to have an experience of God. The subtitle has swallowed the title.

Keller says many good things. Prayer, he reminds us, is not about getting stuff. It’s much bigger than that. And he reminds us that emotions are to play a role in our Christianity as much as our brain. Prayer is more than a routine and a duty and a tool, and it is important that we are reminded of that.

But I get the odd feeling that prayer remains a tool, in this case a tool by which we get an experience of God.

I appreciate Keller’s insistence that we who are created for an eternity of the ‘full enjoying of God’ are in fact to experience some level of awe and intimacy. Communion with God and an experience of his nearness and fatherly affection are great gifts. But that is a different book, it seems to me, than one on prayer. I think that is the book he wanted to write.

There is a wealth of wisdom deposited here, but it feels like a research paper. The wisdom revealed is wisdom wedged into a fairly sterile report on the teaching of the saints of the reformed church. We hear very little of Keller’s passion and very little of any struggle he’s had in prayer. I come away knowing what Calvin, Luther, Augustine, John Owen, Jonathan Edwards, and CS Lewis taught about prayer, and more pointedly, about experience with God and, to be honest, to be in the company of such men can often discourage we mere mortals.

And this is where I think he loses sight of his audience. I consider myself a fairly mature Christian and I believe myself to be fairly disciplined in my Christian walk. And yet I think I need to turn in my Christian Maturity Card whenever someone tells me to read Luther’s letter to his barber which is called ‘A Simple Way to Pray‘. His barber may have found it simple, but I find nothing simple about it at all. I find it daunting. I’m greatly moved by Calvin’s chapters on prayer, and I’ve read and been touched by John Owen’s “Meditations on the Glory of Christ” and “Communion with God“. But I can’t be these men any more than members of my congregation can be me.

To set them as the standard for intimacy with God is to set a standard that none of us can reach, and we will instead, more likely than not, walk away or give up or despair.

I have experienced awe and intimacy with God, but I can’t show another how to ‘do’ that. I’ve wept in services of worship when my life situation and the word preached and the songs sung all flowed together to remind me of my Father’s love. I’ve been moved to deep humility holding the communion cup in my sinful hands knowing how undeserving of such grace I am. At times I’ve almost danced! I’ve had those experiences, but they come by putting myself where God works and waiting for him. I can’t teach another how to have such an experience.

Keller shares a tender story about a father and a son. The son knows he has a father when he is walking with his father. But he knows that reality with far greater warmth and passion and depth when the father scoops the child up in his arms and holds him tight. Keller’s point is that it is this latter experience of God that we should long for.

I agree! But it is a mistake to think that by doing prayer and meditation as he outlines it here will guarantee this. As I think about that image, what I learn is that it is good to be near to the Father. It is good to walk in his presence. It is good to be where he works. But it is his sovereign choice to grab us and hug us. If I try to implement a strategy whose goal is experience, I’ll meet frustration.

You will not have my experience of God, and I will not share yours. You should not aspire to the experience of Augustine, Calvin, or Keller. We can simply walk with God, even through the wilderness. If he chooses to reach down and hug us, we are grateful. But if we know that he has lived, died, and been raised for us, that may need to be enough.