Where would you want to shop? At a store which greeted you with a sign saying something like this: “Unaccompanied Children will be asked to leave with their parents” or some other grim warning, or at a store which displayed this sign: 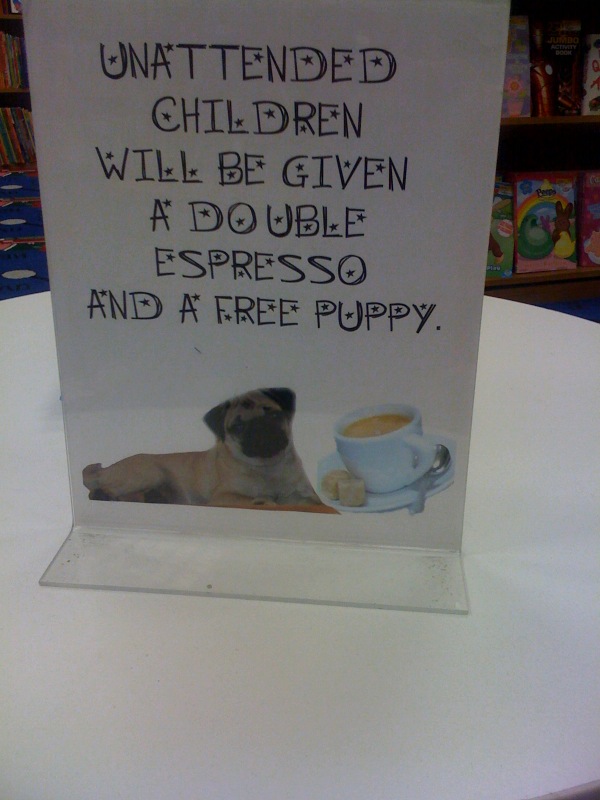 This picture was taken by my son at the store where his wife works. Seeing this, I would chuckle, get the message, and love the store. Winsome humor gets its message across, and wins friends.

David Pogue made the exact point in his post about a customer product manual that sounds as if it were written by fun-loving people and not lawyers.

This reminded me of the manual for my beloved Boston Acoustics Receptor Radio which in the midst of the typical user manual drivel has this to say about connecting the FM antenna wire:

CONNECTING THE FM ANTENNA WIRE
The FM antenna comes pre-attached. If the antenna is disconnected, follow these steps to reconnect it:
1. Push the “F” connector plug on the end of the antenna wire into the receptacle on the Radio.
2. Straighten out the antenna to its full length.
3. Orient the wire for best reception. (The position for best reception is guaranteed by Murphy’s Law to be wherever it looks the worst, like draped down over the front of the kitchen counter.)

Pogue makes the observation that “…many people suffer from Humor Deficiency Syndrome (HDS), a frightening condition that renders you incapable of detecting when, in fact, somebody is even attempting humor.” This is a condition to which it seems Reformed Christians can be sadly susceptible. John Frame in his massive and erudite volume The Doctrine of God says something which he intends to be humorous, but he felt constrained to footnote in the following way:

I am, of course, here jesting with my readers, and I’ve discovered that in Reformed circles I usually need to explain my jokes. (page 276)

Of course, humor can be used as a brutal weapon and can be introduced into the wrong contexts. So can fire. But I’d hate to live in a world without it.

Of Murderous Sisters and Circadian Rhythms

Books Which Have Caught My Eye